We get many questions about chimney caps here at NCC and while a chimney cap is a minor and relatively inexpensive item to install, many homeowners ask what is the purpose of a chimney cap and is it necessary to have one or not. The point is that this small unit protecting your chimney can prevent numerous mishaps from taking place and save a homeowner a good amount of cash in unnecessary repairs or damages. So you may not need a chimney cap in place for functional purposes. Still, unless you want headaches down the road (and maybe animals running through your home), a properly installed chimney cap or cowl is definitely something to look at. A cap can prevent animals from entering your home, keep the moisture out, and can also protect a roof from burning embers starting a fire.

Keeping the animals out!

During the colder months, animals in the area with access to your roof will be able to feel the heat around the chimney pots from your fireplace. This is one of the main reasons animals will make their nests close to or inside the chimney flue itself. It really doesn’t take long for animals to establish themselves and move into your chimney. Squirrels, for instance, can create a 4ft deep nest in less than 24 hours. Installing a chimney cap with wire mesh siding will prevent these animals from entering your chimney and taking up residence within your property. Birds nesting in the enclosed space of a chimney also creates the problem of blocking the path which typically allows smoke and gases from the fire below to exit the home. With large squirrel or bird nest in the way though, these harmful gases will end up backing up into the rooms of your house. This can cause smoke and soot damage and more seriously carbon monoxide poisoning so its something that really needs to be looked at. So uncapped chimneys will just invite these animals to nest and lead to a chimney repair bill in the future which is even more reason to get the correct chimney cap installed for the type of chimney you have.

So Why Is Moisture In The Chimney So Bad?

Rain, snow, and ice can create problems if they are allowed to ingress the chimney flue. Moisture can cause serious deterioration problems within the structure, and when that is mixed with certain types of soot, it can become even more corrosive and harmful to your chimney. The constant freezing and melting of ice and snow can be especially hard on masonry walls, chimney crowns and chimney liners. This often repetitive freeze and thaw damage can cause major problems such as structural cracks during the winter months, and we all know these often lead to expensive repair bills. Therefore, it really is best to not allow the excess moisture into the chimney system in the first place by diverting the problem away from the chimney with a correctly fitted chimney cap. 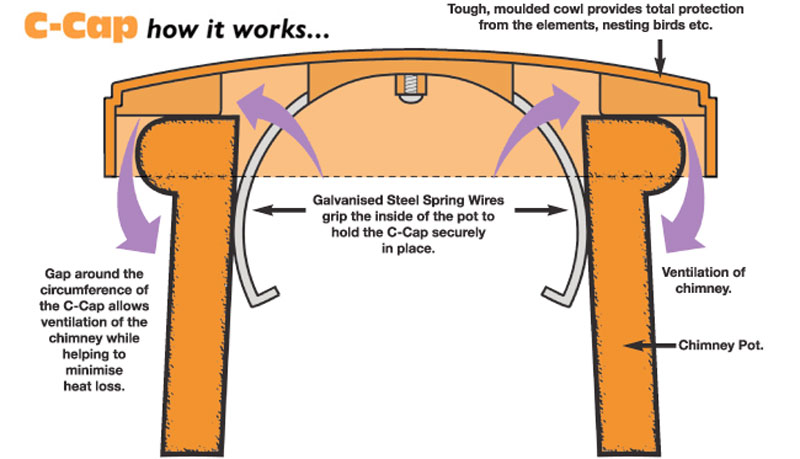 Burning embers and sparks from the wood stove below get sent up and out of the chimney along with the hot burning gases. These pieces of the fire that are often still lit travel up and out of the top of the chimney and can easily cause chimney fires and damage to your roof or surroundings. Often undetected nests can easily catch fire inside the chimney. These problems are easily avoidable with regular chimney cleaning and the addition of a chimney cap or spark arrestor to prevent the burning embers from escaping.

Many customers worry that fitting a cap or cowl will cause problems with the chimney draft. At times adding a chimney cap incorrectly can create draft problems. But if you hire a professional to do the job, a chimney cap or cowl can often fix a draft problem and actually help the stove burn better. Nationwide Chimney Components stock cowls that are specially designed to reduce draft problems or correct existing ones. If you want to make sure the job is done properly it’s crucial to call a professional rather than to attempt the job on your own because incorrect installation can lead to creating more problems. Also, most fitters use much higher quality chimney caps than standard retail caps available at the DIY stores. These caps will also typically come with better manufacturer warranties as well.